As we have mentioned earlier in our article that Holkar dynasty was established by Malhar Rao Holkar in 1727 and its rules ruled the area around present Indore till the independence of India. Here we are providing the Holkar Dynasty family chart to understand the chronology of Holkar dynasty in detail. 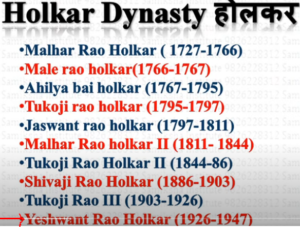 Now we will discuss about important rulers of this dynasty in detail. 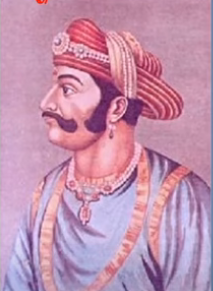 Male Rao Holkar was grandson of Malhar Rao Holkar and he was son of Ahilyabai Holkar and Khanderao Holkar. He became the second ruler of Holkar dynasty in 1766 but he was also got died after some time in 1767.

After the death of Rani Ahilyabai, Tukoji Rao was declared as next Holkar ruler in 1795. He ruled over present Indore for a short span of time and got died in 1797.

Tukoji Rao Holkar was also known for construction of some historical monuments which lays the foundation of modern Indore. Under his rule, railway line between Khandwa & Indore was built. He also constructed M.T.H Hospital, Kila & Shiv Vilas palace. Another ruler Shivaji Rao Holkar ruled from 1886 to 1903 and also known for construction of Holkar Science College. Tukoji Rao Holkar III remained the ruler form 1903 to 1826 and he was known for building High Court, Gandhi Hall, Moti Bunglow. Last known official rulerof Holkar dynasty was Yashwant Rao Rao Holkar who ruled till independence of India in 1947. Holkar dynasty then merged to Madhya Pradesh state of Independant India.

We hope all the information provided here about Holkar dynasty family tree & chronology will be full of interesting facts and knowledge for all our readers.