Mughal Dynasty plays a vital role in the history of India. They reigned India for hundreds of years. Mughal empire or dynasty was established by the first mughal emperor Babur by defeating Ibrahim Lodhi in first battle of Panipat in 1526. He was the founding emperor of Mughal dynasty in India. After Babur, Humayun    became the second emperor of Mughal Empire. They ruled Indian subcontinent  from 15th century to 18th century including modern India, Pakistan, Afghanistan, Bangladesh etc. Some other emperors of Mughal dynasty were Akbar, Jahangir, Shah -Jahan, Aurangzeb, Bahadurshah Zafar etc. Mughal dynasty played a vital +role in the development of architecture of India and made some wonderful pieces of architecture like Taj Mahal, Red Fort, Buland Darwaja etc. They made Agra as their capital city. So, in order to provide you all better knowledge of Mughal dynasty, we will provide Mughal Dynasty Family Tree with Images and Photos. We hope this article  will add some value to your knowledge.

Here in this section of the article, we will provide pictorial representation of Mughal dynasty which started from 1526 when Babur captured Agra and nearby region continues till British Rule. Last powerful Mughal emperor was Aurangzeb and ruled Indian subcontinent for almost 50 years.

Now we will discuss all the Mughal emperors and their achievements in brief. 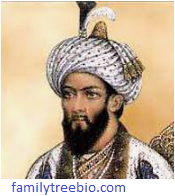 Humayun:  After the death of Babur, he became the 2nd emperor of the Mughal Emperor. He ruled from 1530 to 1540 in the first phase. He was defeated by Sher Shah Suri of the Suri dynasty in Chausa and Kanauj. He ran away in 1540 to Iran. After many years, he again captured Delhi in 1555 but died next year.

Akbar-Great Emperor of the Mughal Dynasty: 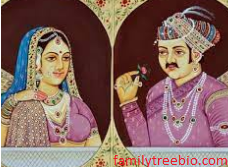 Shah Jahan: After Jahangir, Shah Jahan became the next emperor of the empire and ruled from 1627-1658. His rule is also known for making some wonderful architecture in India. He built Taj Mahal in the memory of his wife Mumtaj Mahal. He also built Red Fort in Delhi and Red Fort in Agra. In the later part of his rule, he was arrested by his son Aurangzeb and kept in to prison for rest his life.

Aurangzeb: Aurangzeb was the last powerful and successful ruler of the Mughal empire. He reigned the empire for a long time from 1658 to 1707. He kept to expand the empire in the North-East of the country. He also faced opposition from his son prince Akbar, so he ran to Iran later on. After Aurangzeb, many other Mughal emperors ruled but none of them was able to get success like their ancestors.

We hope all the information provided about popular Mughal dynasty is full of interesting facts and full of knowledge for all our readers.