This article is all about to know Udhayanidhi Stalin family including his wife & son, movies list, family photos & Biography...

Udhayanidhi Stalin is a well-known personality in Tamil cinema who is an actor, producer by profession. Udhayanidhi Stalin is son of current chief minister of Tamil Nadu state, M.K Stalin and grandson of legendary personality Karunanidhi. He was born on 27th November, 1977 at Alwarpet, Madras in Tamil Nadu in the house of father M.K Stalin and mother Durga Stalin. Presently he is Member of Legislative Assembly (MLA) from Chepauk-Thiruvallikeni from DMK party. 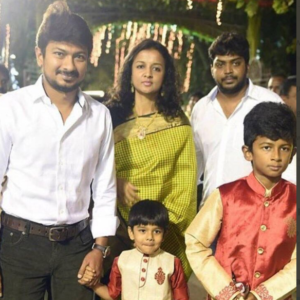 He belongs to Karunanidhi family and earned name in both cinema and politics. As an actor, he firstly appeared as guest appearance in the movie “Aadhavan” in year 2009. As a producer, he produced his first movie “Kuruvi” in year 2008. In this article, he will discuss about Udhayanidhi Stalin family including his wife & son, age, movies list and professional life in detail.

As we have discussed earlier, actor Udhayanidhi was born on 27th November, 1977 at Alwarpet, Madras in Tamil Nadu, so we can conclude that Udhayanidhi Stalin is currently 44 years old in year 2021.

Udhayanidhi Stalin got married to Kiruthiga Stalin in year 2002 and blessed with two kids including son Inbanithi and daughter Tanmaya. 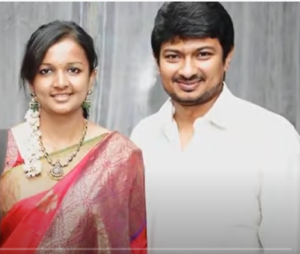 We hope all the information provided here about Udhayanidhi Stalin will be interesting and entertaining for all our viewers.